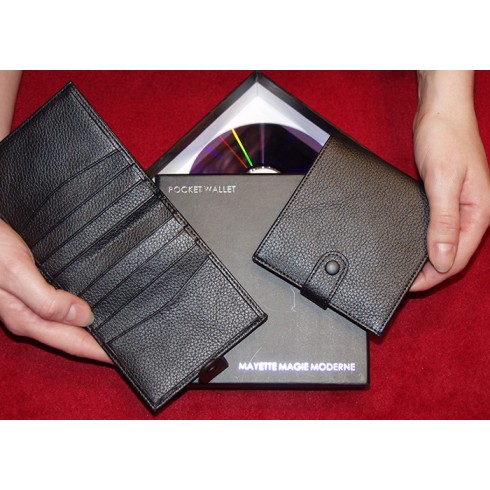 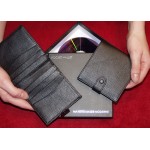 New tool, new performance, this wallet that is designed for your credit cards, cash, credit card coupons, etc. will allow you to do crazy routines that you don't even know are possible in your wildest dreams.

"The ticket routine that Duvivier presents in his DVD "From old to new vol.1" is an entertainment treat associated with a killer climax. Don't miss it. It's one of the best products I've seen this year". Sylvain Mirouf

"This (these) wallet(s) is for me the best version of a "rigged" wallet that exists.... Extremely versatile and super practical, the possibilities with this accessory are "endless" . To buy without any moderation..." Mathieu Bich

New tool, new performance, this wallet that is designed for your credit cards, cash, credit card coupons, etc. will allow you to do crazy routines that you don't even know are possible in your wildest dreams.

It comes with an examinable leather wallet that you can use every day with or without magic.

A second wallet identical but rigged which allows you to exchange anything you want. You can use one or the other or both every day.

A recorded DVD will give you several demonstrations and detailed explanations of several possibilities with this new " wallet ". of a revolutionary conception in its realization.

The "Pocket Wallet" has been used professionally by Dominique for many years.

You can use the "Pocket Wallet" to perform his own cult routines, especially on his 1 dollar bills (publication "From Old to New", volume 1).

There are in the conception of this "Pocket Wallet" some Machiavellian ideas from Dominique Duvivier as you know him, but also from Michael Weber and Roger Klause .

This "Pocket Wallet" is the first in a series of "wallets" to come.

What is yours comes with the "Pocket Wallet":

- 2 leather wallets (one fake and one normal)

You borrow a 20 euro bill. The magician sorts all the contents of his wallet: a 50 euros bill and a 100 euros bill. The magician proposes to the spectator the following game : I'm going to take your 20 euros banknote and my 50 euros banknote, I'm going to put these two banknotes in your hand (20 euros and 50 euros) and take out one of them, if you manage to know which one is in your hand, you will win my 100 euros ! If you lose, you won't have to pay anything. Honesty, right? The magician has met the two banknotes as said before and comes out one for him: the 20 euro bill obviously. A magical gesture, and in a split second the 20 banknote has just metamorphosed into a 50 banknote !!! The spectator opens his hand and finds his 20 euros banknote! The magician shows the 100 banknote, unfortunately lost by the spectator.

All the banknotes are left to the examination. Then arranged in the wallet shown empty beforehand. And it is not finished! While the wallet is closed and put on the table, the magician "virtually" grabs from nothingness a bill which materializes: the 50 ? bill of the wallet has apparently just arrived in the magician's fingers ! ! The same banknote is transformed in turn into a 100 euros banknote. It's doubtful that he understands !!! Finally, this bill of 100 is transformed into a bill of 200 euros.Yes you read it right : 200 euros .

No, it's still not finished! The bill of 200 is replaced in the wallet which also contains a bill of 100 and a bill of 50 euros. The magician entrusts the spectator with his wallet, telling him about the miracle of the transposition of the 50 euros bill. He asks him to open his wallet himself and as we were just talking about a 50 euro bill, a rain of 50 euro bills comes out of the wallet. Unbelievable! While the wallet has been shown empty many times. The wallet is left for examination. You have to see it to believe it!

The tour is provided without any bill. Your imagination will replace the big bills by small ones or other papers, of course ! !

No manipulation required for this miracle. A versatile tool with endless possibilities.

3The last thing I needed was another magic wallet (I have about 15 of them), but I'm happy because I now have this one. The second untruqued wallet is not just there for the audience to look at, it really does a great routine. As Mr. Duvivier says, it works as if we had another rigged wallet. It's very clever.3 Mo (Long Island, NY, USA)

"There are times when you wish you could find an object that is both banal and terribly vicious, ordinary and unique, simple and complex, limited only by your imagination, and allowing your magic to be exploited even further. Well you know what? It's done, with the pocket wallet!" Florian Chapron